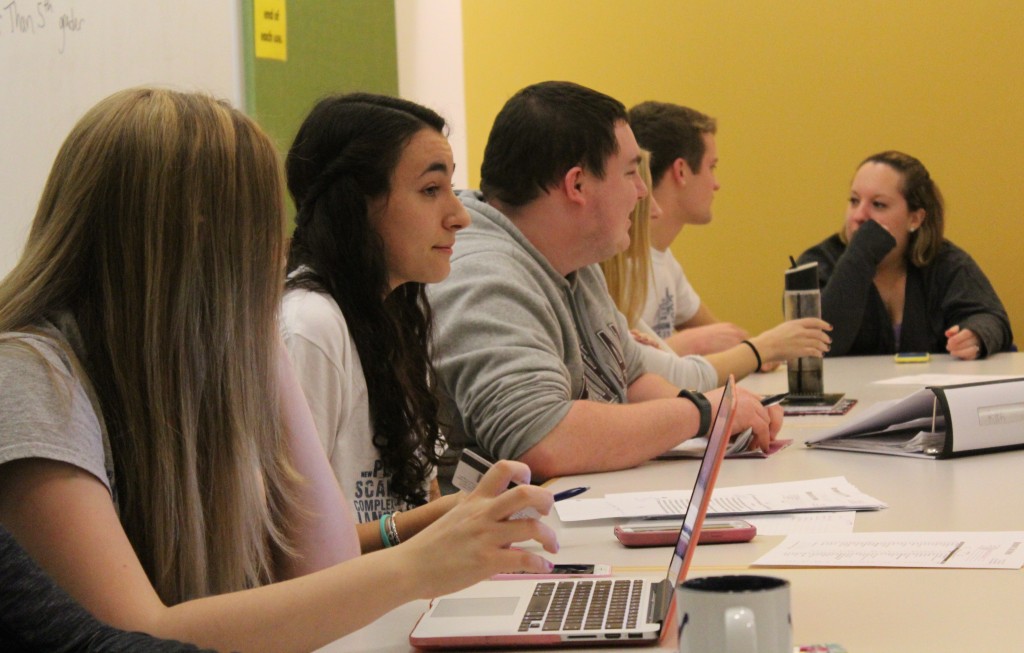 From left to right, Gina Muller, Lauren Grams, Brendan Kckee, Andrew Menard, and Emily Butyinski.
The executive board led the general board meeting where each hall council gave updates on
the current status of their buildings. (Photo: Delaney Gembis, Photography Editor)

Last Thursday, the Residence Hall Association held its first general board meeting of the semester. The meetingwas held in Meeting Room A in University Hall.

Lauren Grams, vice president, explained the hall council incentive program and what was expected from each hall council.

Each residence hall gave an update on the current status of their hall, as well as additional updates since the last general board meeting before winter break.

Courtney Hall held an anti-stress event during finals week in December, and also lost members of their hall council. The remaining hall council is working on recruiting more members and is in the process of planning an event. The event is to be determined.

University Hall held a wings event for a Patriots game before winter break. Next Thursday they will hold a Valentine’s Day heart hunt.

They also reported that the malfunctioning second elevator had been fixed; however, it was stated that it had broken again. The hall council also has a vacant treasurer position and is working to fill it.

Lammers Hall held a gingerbread housemaking event before winter break. Between 120 and 130 residents attended. The hall council also reported that they are working on a welcome back breakfast, and that the treasurer position is open after a student resignation.

Davis Hall held an event before winter break with eggnog and cookies. They are currently trying to figure out how to keep track of the hall charges, as there are a large amount of them.

Dickinson Hall held a movie night during finals week, and replaced the broken water fountain. The council’s secretary left the position and the remaining council is trying to fill the position.

Scanlon Hall held a “chow down” event since the last general board meeting. The event was a success, even thought there was a large mess was left behind.

Brendan McKee, RHA executive board president, requested that the present hall council members fill out an updated contact sheet since many members have resigned and positions were filled with new members.

be Family Feud. Applications for the NEACURH mini conference were addressed, and alternates were encouraged to apply.

The conference will be held at Western New England University for Residence Hall Associations from across the region.

Dr. Jen Armstrong And Ryne Holliday Appear To Be In A Tight Situation, Find Out Why !!!

A Live-Action “Barbie” Movie Supposedly Contains Numerous Barbies And Kens Without A Multiverse To Explain It!!!