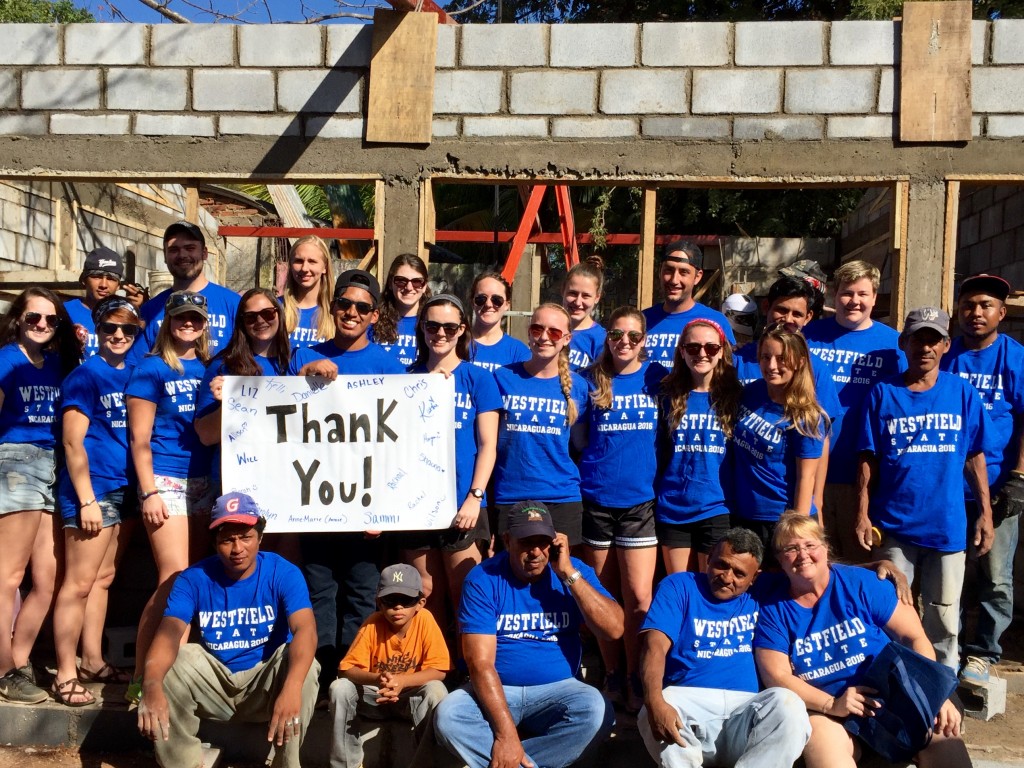 Westfield State students pose in front of the kindergarten classroom they built during winter break in Nicaragua. (Photo: Molly Watson)

This is the sixth consecutive year that Westfield State students and faculty have traveled to Nicaragua. Each year, they assist La Esperanza Granada, a local nonprofit that focuses on bettering children’s education. The organization aids more than 2,000 children in poverty-stricken areas. The course was led by Kathi Bradford, director of Alumni Relations and Kelli Nielsen ’04.

Since the course’s inception Westfield State students have raised nearly $40,000 for the organization, $8,500 of which was collected for the January course. In past years, the groups were able to lay the foundation for three different classrooms and build an entire technology classroom in a new high school (which was fully funded by Westfield State fundraising), build an entire community center, and a technology classroom for the elementary school with an updated water system and new latrines.

This year, the group built an entire kindergarten classroom.

Bradford, who has taught the course each year, said she is amazed by how the city has progressed since the university’s first course.

“It is incredible to see growth each year in the kinds of houses they are living in, the addition of better roadways, running water and classrooms,” Bradford said. “For me, the legacy that Westfield State has in Nueva Esperanza is strong, present and part of that community.”

Perhaps the biggest change Bradford has seen is the Nicaraguan people.

“I have watched children grow, move to high school and now, evengraduate from college,” Bradford said. “We are making a difference in their lives and ours.”

Bradford said that the group of students who participated in the course this year stood out.

“This year’s students were incredible,” Bradford said. “They are truly passionate future teachers and others who brought language skills, music, a sociological perspective and more. Their learning, passion and commitment shows in everything they do.”

Student Samantha Lee, ’17 of Hopkinton, Mass., had previously taken the course and was inspired to take it again as a student leader. As a student leader, she was responsible for organizing math and literacy lessons to teachwhile in Nicaragua. She also communicated with the Nicaraguan workers and delegated tasks to her classmates.

“I was inspired to revisit Nicaragua because of the beauty and kindness the nation has to offer,” Lee said. “I was brought back to the amazing hearts of the people I met my first trip there. The children are constantly bright and positive, reminding me to always look for the best in every situation and be thankful for everything I have at home.”

Ashley McLaughlin ’17 of Pittsfield, Mass. said she enjoyed interacting with the locals.

“The highlight of this course was being able to teach, talk to, and bond with the children in the community in whichwe were engaged,” McLaughlin said.

“They were so patient, loving, understanding, and welcoming. I cherished the time I was able to spend with them.”
McLaughlin also said that the course reaffirmed her career path.

“This experience definitely reinforced my career goals as an educator because it reminded me what I love so much about teaching and why having an education is such an important and valuable tool,” McLaughlin said.

Lee said the highlight of the course for her was the very last day.

“We were able to see the workers starting the roof- a sight we did not think we would see, as the building was slow to start during the first week,” Lee said.

“Our eyes were wide, proud of the work we helped complete. We celebrated with the students and ayudantes, singing and dancing and watching traditional Nicaraguan performances.

This day was a true representation of the hard work our entire class put in each day on the work site, and the love and compassion we were shown in return.”