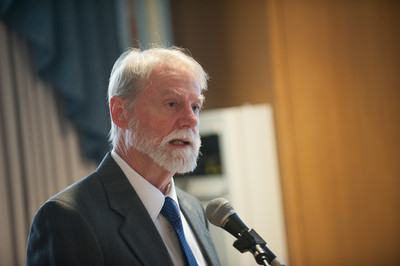 Sigma Tau Delta, International English Honor Society, was founded in 1924. According to its official website, the society strives to confer distinction for high achievement in English language and literature in undergraduate, graduate, and professional studies. The organization has more than 875 active chapters, more than 1,000 faculty sponsors, and approximately 9,000 members inducted annually.

Westfield State University’s chapter of Sigma Tau Delta is very active. Student members attend the annual Sigma Tau Delta convention each year and many present their creative and academic work. The chapter meets weekly and holds fundraisers throughout the year to supplement the cost to travel to the convention.

“Dr. Brewster is particularly dedicated to ensuring that students have the opportunity to attend Sigma Tau Delta’s annual convention each year,” said Dr. Elizabeth Starr, professor of English and faculty advisor to Sigma Tau Delta. “As a result of his efforts, we always get to bring a large group of students to the convention.

This is no easy task, and he tirelessly helps students apply for the funding that is available on campus as well as helping them organize fund-raising activities.”

“I plan to continue the focus of the society on student opportunities for conference presentations and publishing, giving out even more money in scholarships, developing more internship venues, and collaborating with other professional organizations in the field to promote the discipline of English in its many aspects,” Dr. Brewster said.

Dr. Starr said Dr. Brewster is deserving of the national appointment because of his dedication to Westfield State’s chapter.

“Dr. Brewster attends every local chapter meeting, even as he has become actively involved with Sigma Tau Delta at the national level,” Starr said. “He’s always there for our students and makes sure they apply for scholarships, submit their work to conferences and publications, and share their talents with our campus and local communities.

Dr. Brewster said he is looking forward to his new responsibilities even if it means longer hours.

“When we have our extended meetings at the convention cities twice a year, we conduct serious business, with meetings from 8 a.m. to as late as 11 p.m., but we also have fun because of our shared interests and their good humor,” Dr. Brewster said. “All of us care about our work and care about our students.”