The Student Government Association at Westfield State University is the largest student government out of all state schools in the United States, and one person oversees the entire senate: the president, Evelyn Dina.

Ev—as her friends call her—grew up in Sutton, Massachusetts and had little to do with student government at Sutton High School, focusing instead on softball and cheerleading. 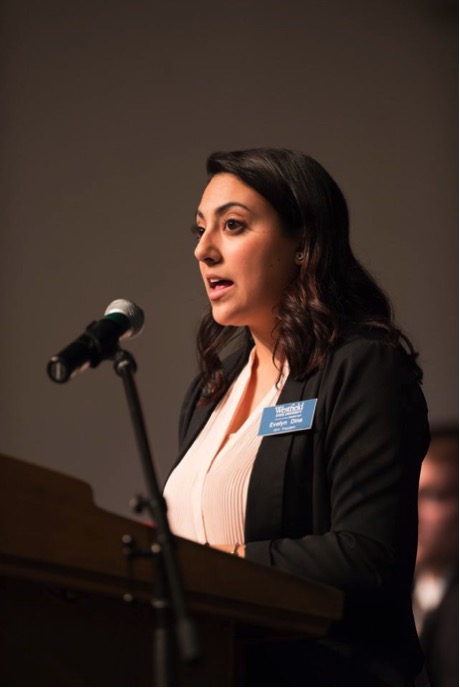 “I was not a leader in high school,” she said.
When Ev came to Westfield State, she decided to stray away from sports.

“I decided that I was going to try something new, because sports wasn’t really something I wanted to pursue here,” she said.

Currently a communication major with a concentration in public and corporate communication, Ev started off her Westfield career with a bang. She got started with student government when she was an SGA representative for Davis Hall her freshman year and continued as a representative for Courtney Hall the first semester of her sophomore year. She was also largely involved with the Campus Activities Board for the first two years of college, working as the advertising coordinator on their executive board for a semester.

Evelyn participated in the Disney College Program in the spring of her sophomore year, and she decided she wanted to focus more on student government as a junior the following fall semester. She ran for SGA’s legislative secretary position and won.

Justin Connolly, Student Trustee and one of Ev’s good friends, helped her to get signatures for her nomination forms while she was in Florida.

“He was literally my campaign manager. I owe everything to him pretty much,” she said.

After a year on SGA’s executive board as the legislative secretary, Evelyn ran for president and the rest is history.

As SGA president, Ev wears many hats. She oversees the 70 plus student legislature as well as the SGA executive board. She chairs the weekly SGA and executive board meetings, and essentially serves as the official liaison between the student body and the University’s administration. On top of all of this, Ev also appoints students to specific governance committees, specifically search committees.

As far as her accomplishments this year, there almost isn’t enough space to talk about them all.

On the wall of her office hangs a list of goals that Ev created in her first semester, all of which she wanted to achieve during her term as president. One of the biggest goals, and one that she has strived to accomplish over the past few months, was making the campus community more aware of the SGA’s presence on campus.

“One thing that I implemented this year was this award called the Spotlight Club of the Month award,” she said.
The Spotlight Club of the Month award highlights a new club every month that shows excellence in that club’s sphere of interest, study, etc. Clubs can self-nominate, or someone outside of the club can nominate them. This award is a great way to recognize clubs that are doing great things both on and off campus.

When a club receives this Spotlight award, Ev writes a bio describing what the club is about, what they have been doing this year, and what they have accomplished so far. She then shares it with the senate at the SGA meeting. A member of the SGA executive board goes to the club’s meeting to take a picture of the club and congratulate them on all of their hard work. The winning club gets recognized on the SGA Facebook page and is awarded a pizza party.

“It’s a nice recognition from SGA,” she said.

Ev also created a new position on SGA: the Veterans Representative. This position stemmed from a request from the veterans affairs office to have an spokesperson in senate to advocate for student veterans and veteran alumni One of the more recent installments that Ev created was the Bring a Friend to SGA Day. Last month, members of senate were encouraged to invite a friend that is not currently in SGA to sit in on the meeting and stay for a trivia pizza party after the meeting. With SGA and Class Council elections right around the corner, it was perfect timing.

“It was implemented to increase awareness of what SGA does,” Ev said.

On Feb. 9, Dina gave the 5th annual State of the Campus Address at Dever Stage. The SGA President gives this 40-minute address every year at the same venue.

“I’ve never in my life written something that long,” Ev joked.

The address highlights all of the University’s accomplishments so far in the academic year. Dina said that this address was a unique experience, and it took quite a long time to prepare. 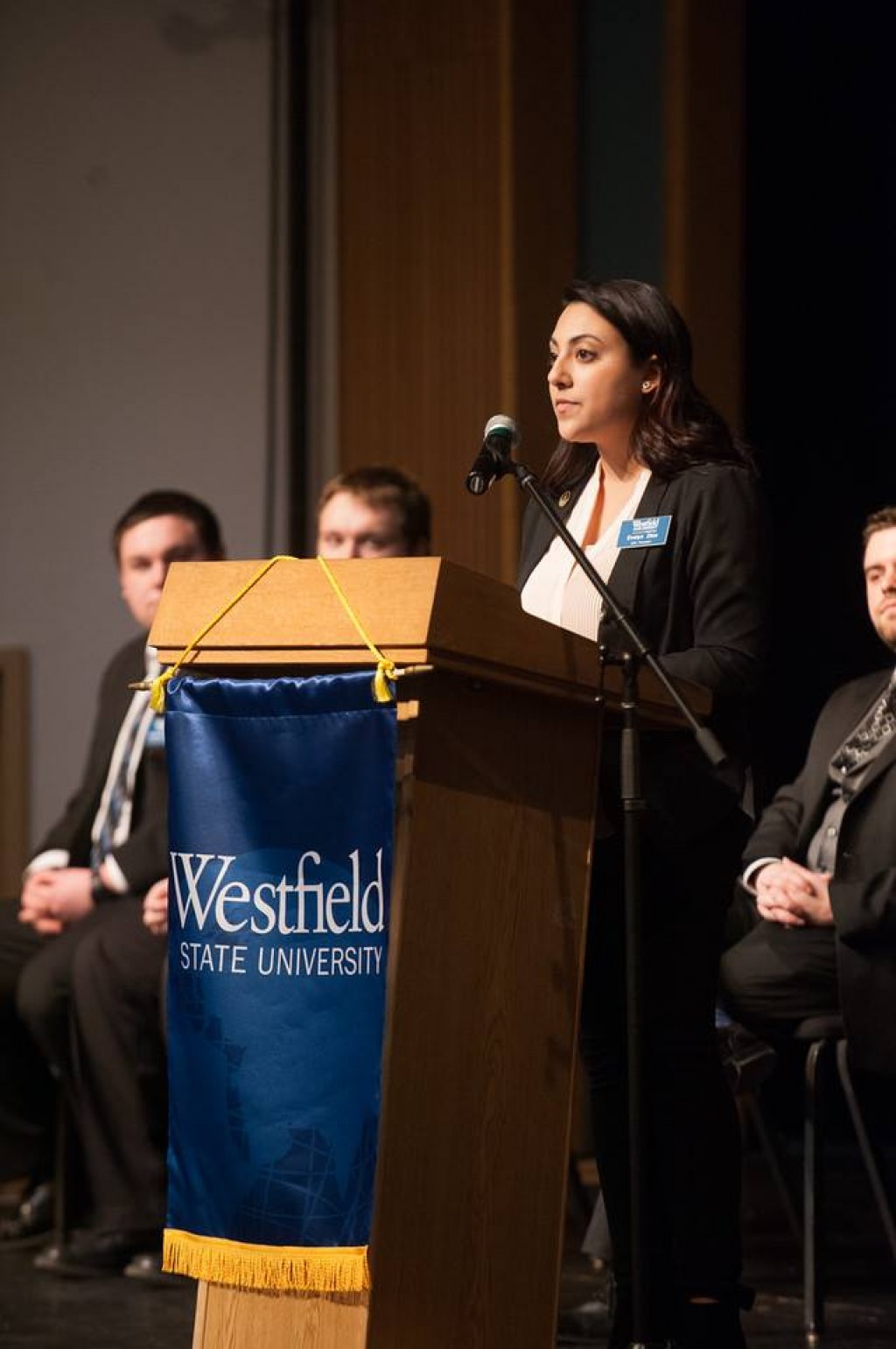 She reached out to several different clubs, organizations, faculty members, students, etc. This year, Ev’s address included the new Catherine Dower Center, blood drives, the Mr. Westfield competition, and more. The event had a pretty successful turnout, including a combination of students, faculty, and even new University President Ramon Torrecilha.

“He took a selfie with us… and with my parents,” Ev laughed.

On top of all the wonderful things Ev has done for this campus, she is also a genuinely good person. Many of her friends and fellow senators not only praise her spirit but also endorse her professionalism.

“Evelyn Dina is a light shining on this campus. Not only does she open her door to any student that needs advice or support, but she also constantly makes an effort to make photo from the sga facebook page this campus better than it was the day before,” said VP of Programming, Haley Batchelder.

“I admire Ev for her combination of both confidence and humility. I can depend on Ev for anything and I know she will always be there to lend a helping hand. She is going to succeed tremendously in her life after Westfield both in her professional and her personal life,” agrees Justin Connolly.

“Ev is one of the best student leaders that WSU has to offer. She works tirelessly for the greater good, and I’m glad to call her my friend,” adds Jacob Lotter, legislative secretary of the SGA.

As for the future, Ev has some big dreams. Currently, Ev serves as the development intern for the Make A Wish Foundation of Massachusetts and Rhode Island, and though she loves it, she is ultimately looking to work for a university.

“I’m hoping to begin my career in higher education because I have had such a great experience here, potentially in development at a university,” she said.

Ev hopes to get either her MBA or MA in organizational leadership in a few years, and she has been applying for jobs at several universities, including Harvard Business School. Ev would like to work in a field relating to project development, program coordination, or alumni relations. With commencement less than 40 days away, the reality of having to leave Westfield State is sinking in for Ev.

“It’s been an awesome four years at Westfield. I’m sad to leave. I’ve made some of the best friends here, including faculty and staff, that I’m really lucky to have,” Ev said.