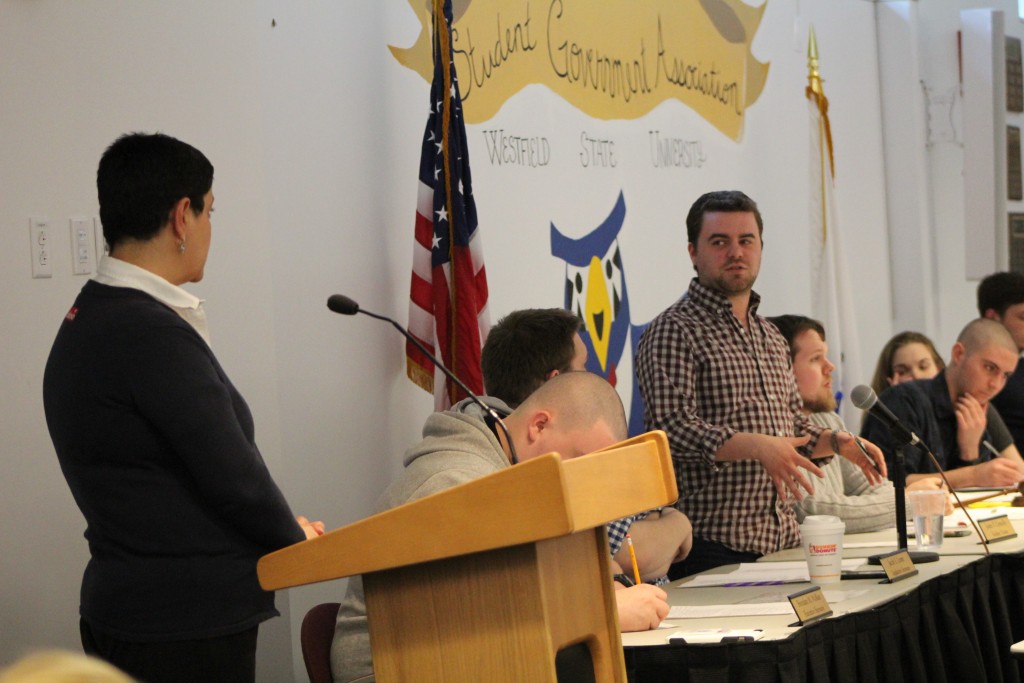 On April 12, 2016, the Student Government Association met for their weekly meeting.

To begin the meeting, Madam President Evelyn Dina introduced Maria Lees from Sodexo Dining Services to discuss any and all comments, questions, or concerns raised by the students about dining services at Westfield State.

Lees pointed out that Sodexo will be working to lessen their footprint, eventually getting rid of all the disposables on campus, specifically in the DC, including dessert plates and the cups used for coffee, tea, and hot chocolate. The cups used for ice cream will be switched to a more expensive but biodegradable alternative. These new cups will only be 19 cents more than the current cups. Lees said that the cost is not what matters; the priority is how this change will help the environment.

Lees mentioned that Westfield State is actually on the tail end of Sodexo’s sustainability movement compared to other institutions in Mass.

Brandon Trafford, vice president of finance, addressed Less regarding the possibility of replacing the current plastic cups in the DC with reusable to-go cups, which was originally brought to senate two weeks ago by Andrew Manchino on behalf of the Food Services Committee.

“Nothing has been set in stone,” said Lees.

She went on to explain that this service could become part of the meal plan, in which students receive a reusable cup to bring to the DC to be used, and then be taken out of the DC and brought back to be laundered. These cups would not be students’ personal cups, but rather a temporary, reusable cup that could be exchanged for a freshly laundered cup after the student used it. She also made it a point to mention that the DC’s dishwasher is set at 190 degrees, which is 20 degrees higher than the FDA minimum of 170 degrees, to emphasize the sterility of the dishes, utensils, and cups.

Maddie Dexter, apartment complex president, proposed the idea of a tracking system with student IDs to enhance the efficiency of the system. Under the impression that this feature would be included on a meal plan, Dexter pointed out that this would allow students who do not have a meal plan to take out a reusable togo cup—so they could access this feature specifically for no additional cost. This would also apply to students who do purchase a meal plan as it might assist the dining commons in tracking cups in use vs. cups in circulation to be laundered. This will greatly reduce the overwhelming number of current plastic cups taken out of the DC and not returned each semester. Dexter’s proposal was met with praise by both the senate and Lees herself. Lees mentioned that this idea would be something to consider, and would also be brought to the next Food Services Committee meeting.

Lees went on to emphasize once again the importance of educating young people about the reality of how plastic is disposed of in landfills and how long it takes for these items to decompose.

“The ultimate goal is to help the environment,” said Lees.

Dina returned to the podium and reported that Phi Alpha Honors Society is looking for volunteers for their Foster Change with Spare Change event on the campus green Saturday, April 23 at 10 a.m. Students are encouraged to reach out if they are interested in volunteering for this event.

Marissa Cremin reported on behalf of Community Relations and Fundraising, stating that the dress drive held last month was immensely successful, bringing in over 100 prom dresses for high school students in the area who could not afford to purchase a dress.

Jon Cubetus, vice president of academic life, reported that the last day to withdraw from this semester’s classes—with a faculty signature—is April 15. He also mentioned that next Tuesday, April 19 will follow the regular Tuesday schedule, even though Monday is President’s Day and there are no classes. Cubetus also reminded students that the last day of classes is May 9, with May 10 as a reading day.

Vice President of Programming Haley Batchelder talked about a new addition to this year’s SpringFest, which will be an open mic night hosted by WSKB. This event will take place from 7-9 p.m. on the Friday of SpringFest. Anyone is encouraged to participate.

‘Avatar: The Way of Water’ Cast returns to Pandora at Disney’s Animal Kingdom!

McDonald’s ‘McGold Card’-Free Food For Life: How To Win?