During this week’s Student Government Association meeting, Student Trustee Justin Connolly announced that the University had officially terminated its contract with Sodexo dining. Dr. Kimberly Tobin, vice president of administration and finance, assisted Connolly in answering questions regarding this change.

Instead of Sodexo, the University will be using UMASS Amherst’s food services as a guide as they move forward with this new, university-run dining service, which will go into effect on July 1, 2016.

“We really want to give you food that you love, not that you tolerate,” said Tobin.

Many senate members were concerned about the fate of the current DC workers because of this sudden change. Tobin assured that the University was in the midst of working on this. Many of the workers are University employees, so they would be able to stay with the University’s dining service. The University is still negotiating the contracts of the managers who work specifically for Sodexo, but they are willing to buy out some of these people and take them on as University employees.

Class of 2016 representative Shannon Cullinane asked if the proposed to-go cup program that Maria Lees spoke to senate about at last weeks meeting was still to be enacted.

“There’s a lot more to sustainability than charging you for cups,” Tobin said.

In regards to the future of dining sustainability, Tobin said that the quality of the food would drastically change. Where the food would be coming from, as well as reduction in food waste, would be priority. Smaller portion sizes and changes in serving methods would be part of these changes as well.

Rebecca Kennedy, University Hall representative, asked if there would be a Sodexo bucks equivalent with this new dining service. Tobin said that there would be, but like the scholarships, they would not be through Sodexo and would no longer be called Sodexo bucks.

“They will be negotiated in a way that works for students,” Tobin said.

Lammers Hall Representative Molly Lucey was curious about the fate of the MyZone and Simple Serving stations in the DC, which are reserved for students with food allergies and other specific food needs. Tobin said that these types of stations would remain in the DC, but would be improved and more efficient than the current stations.

Brandon Trafford, vice president of finance, asked if Tobin knew how much money would be saved by terminating the contract with Sodexo with the University running the dining services as a self-operation.

In regards to finances in the future, Tobin said that it depended on the meal plans going forward, but approximately $500,000 to $700,00 could come back to the institution in additional revenue.

“I think you will be amazed when you come back in September,” said Tobin.

Dean of Academic Technology Tom Raffensperger also spoke at this week’s SGA meeting in regards to the future of printing on campus, a topic brought to SGA a few weeks prior.

Raffensperger spoke to senate about a proposal to allocate 400 sheets of paper per year for each student at no cost. After this initial allocation, each additional sheet of paper printed would be five cents a page. This proposal is aimed at saving money, trees, and reducing the University’s carbon footprint. 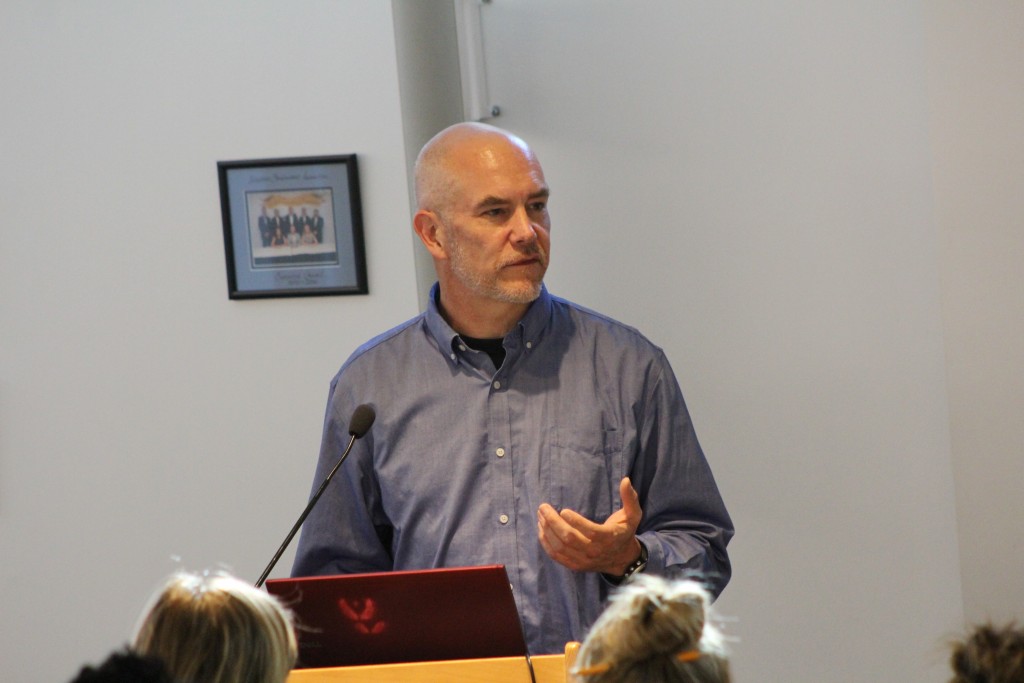 If every student on campus printed under 400 sheets of paper, it would save the University anywhere from $15,000 to $20,000 per year. Raffensperger assured senate that the University would not be making money, but rather saving money, as the University loses money on paper every year.

Raffensperger also stated that over 80 percent of students would not pay anything for printing over the course of the year, as the average amount of pages printed per student each year is 263 pages. Raffensperger also pointed out that even if a student were to use double the amount of free allocated pages, they would still only be paying ten dollars.

Raffensperger also mentioned that printing on campus really was not free to begin with; students technically pay for their printing through tuition and fees.

This allocation would be generous compared to other universities in the area. Salem State University, for example, charges students ten cents for each printed page, totaling five dollars for every 50 pages printed.

Michael Guertin, class of 2019 representative, asked Raffensperger if printing for a club would be included in the 400-page allocation. Raffensperger said that although this was still being discussed, printing for clubs would probably be included in the clubs’ budgets. Other institutions with similar printing allocations gave their clubs and organizations budgets for printing to be factored into the club’s account.

Davis Hall Representative Sean Bacon asked if this 400-page allocation would be for every printer on campus, including the printers in Wilson, which currently do not require a card-swipe. Raffensperger told senate that card-swipe machines would be added to all printers on campus.

He also mentioned that adding a color printer to the library was a topic of discussion as well. Color printing would be offered for around twenty cents per page.

Both Ryan Losco, Class of 2016 president and parliamentarian, and Dana Kilby, representative-at-large, voiced their concerns over this proposal. Losco suggested making this proposal into something similar to a pilot program, testing it out in different departments and evaluating the results.

Kilby suggested making the proposal more of a community effort; rather than educating faculty and staff and restricting students, educating everyone and then focusing on restrictions could be beneficial. Raffensperger said that he would take both of these ideas, as well as other students’ feedback and suggestions, back to the cabinet.

Maddie Dexter, Apartment Complex president, voiced her support for this proposal. Dexter works in the library, and she sees the daily strain the printers face as students print hundreds of pages at once; the printers are easily jammed and frequently backed up.

Dexter believes this proposal would help everyone to print more efficiently, and Raffensperger agreed.