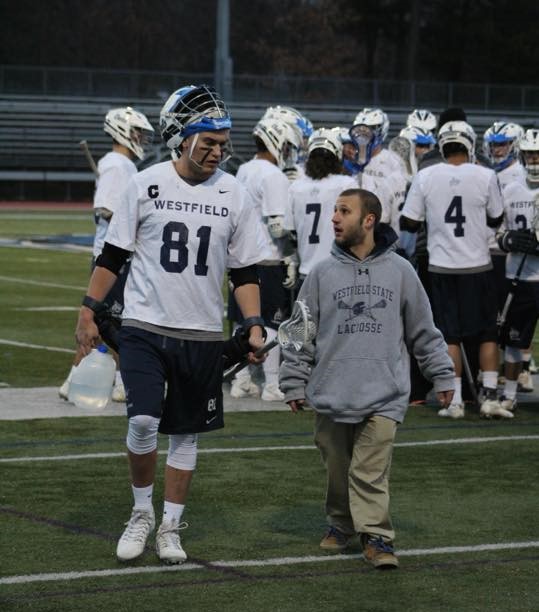 As Westfield’s Club Lacrosse team struggled to produce offense against Worcester Polytech, frustrated assistant coach Nicholas “Cabbage” Kates paced the sidelines. In his blue Westfield State lacrosse polo and khakis, Kates flailed his arms and shook his head in the most animated of fashions.

At 4’11” on a good day, Kates is minimal in stature on the Owls’ sideline, but his deep, raspy voice and rambunctious approach to coaching makes it hard to miss him.

He almost makes you feel like, at any moment, he could go Bob Knight on everyone and throw a chair onto the field. Whether you are one of his players or a referee going about his business, no one is safe from coach Kates’ wrath.

One look at Kates and you wouldn’t guess that he has the credentials to coach a team of any magnitude. If you made that assumption, you’d be wrong. His lacrosse knowledge comes from growing up in a hotbed for the sport, and coming up in a highly competitive environment.

Kates grew up in Duxbury, Massachusetts, a small beach town on the south shore with a population of 15,000 that produces state championships like a factory, especially in lacrosse.

Kates credits his love of sports to his father and older brother, who pushed him into the competitive spirit early.

“My brother played every sport growing up, and I wanted to do the same things,” said Kates. “My whole family is involved in sports, my brother and father were both varsity athletes for over 10 seasons, I was for 12 seasons myself.”

Clearly his sports background isn’t strictly limited to lacrosse. Kates has also wrestled his whole life, and was a four-year varsity starter on the team, qualifying for states all four years. He won state sectionals as a sophomore, and was voted as a captain his senior year.

He helped manage the Duxbury High football team from sixth grade to freshman year, when he was eventually promoted to assistant coach and ball boy. This was where he was able to help with play calling, earning him two state championship rings. Unfortunately, he never played football due to his size and his desire to focus on wrestling.

Kates’ lacrosse playing days date back to when he was eight years old, playing for Duxbury Youth Lacrosse on a local travel team. In fifth grade, he made the transition to goalie and never looked back.

He was never able to gain control of a full-time starting spot on the varsity squad, as he was competing with other goalies that were heading to schools like Drexel, Georgetown, and Harvard. When you’re behind blue chip prospects like that, it’s difficult to even get a chance.

Despite the lack of time at the varsity level, Kates still received offers from some Division II NCAA teams. He received offers from both Springfield College and American International College, but had no interest in playing varsity lacrosse and elected to go with the more affordable state school.

After choosing to go to Westfield, Kates tried out for the club lacrosse team and came in hot, grabbing the starting position his freshman year. Sadly, shoulder problems and surgeries have prevented him from playing since then; however, Kates—who was beloved for his audacious personality and revered for his knowledge of the sport—received an offer to come back to the team as an assistant coach, which he happily accepted.

“I love lacrosse. I grew up in a town that’s consumed by it. It’s hard not to fall in love with it and learn the game,” said Kates, who credited a lot of his lacrosse knowledge to living in a town that breeds Division I recruits.

For the past two seasons, Kates has helped man the sidelines. This team goes through frequent coaching changes, making him the only solid piece on the coaching staff. His knowledge of the team really helps in many situations.

“My favorite part of coaching is seeing kids develop and progress over a season. It makes me feel good as a coach knowing my players are getting better and having fun doing it,” said Kates.

Kates certainly had time to see many younger players develop this year, and he’ll get to see it manifest in the team next year as only four seniors are graduating from this year’s squad. Kates oozed with confidence in his team, despite just missing the playoffs this season.

“We only graduated four kids so we pretty much get all of our starters back. I think next season is going to be one for the books. The chemistry needs to get there and once that’s there I don’t know if we lose a game all year. We got talent, just need to put it together,” said Kates.

So at first glance, Nicholas Kates may not look like your run-of-the-mill coach, and you may laugh him out of the building if he told you, but don’t doubt him, because you couldn’t be more wrong.