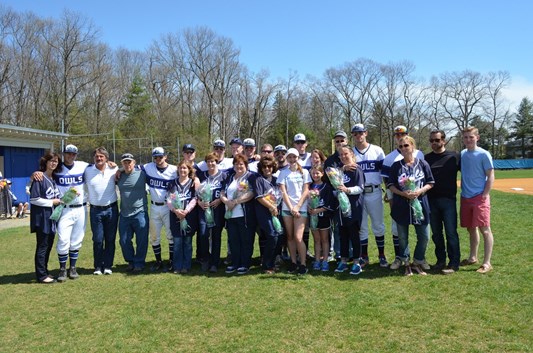 The 2016 Senior Class was reconized and honored inbetween games on senior day.
(Photo from WSU Athletics)

This past Saturday was senior day for the Westfield Owls men’s baseball team. It was a day to reflect on their careers as Owls, as they were about to play a double header against their MASCAC rivals, the Fitchburg State Falcons.

The Owls would fall to the Falcons in their first game 5¬-2, but would rally in their second game to win 10¬-5.

At the plate, the Owls started to get it going in the bottom of the seventh. Christian Morales doubled down the left field line, driving in a run from Jared Ferrari. Junior Arismendy Larancuent also made contact and drove in a run from Kyle Murphy.
The runs just weren’t coming in the first game, but that would not be a problem for the Owls in the second game of the day. The Owls would go for 11 hits in their second outing.

They opened up the game with two runs scored in the first, second, and third inning. Fitchburg would score one run in the top of the second to make the score 6¬-1, and both teams would go scoreless in the fourth and fifth innings. In the top of the sixth, Fitchburg began to battle back by
scoring two more runs. The Owls did that and then some, scoring four runs in the sixth.

Three Owls in particular had great games at the plate. Nate Barnes had two hits, scoring once and driving in a run. As for Aaron Clancy, he also had two hits and a run driven in. Tyler Beach had a noteworthy game as well, recording two hits, a run scored, and driving in two runners.

On the mound for the Owls was Matt Nunes, who had eight strikeouts throughout six innings of work. Pete Liimatainen, who closed out the game, recorded one strikeout and allowed three runs, but it was enough for the Owls to come away with the victory.

Senior day for the Owls ended on a high note, sending out the seniors with a big win over a conference rival. The Owls have five more games remaining in their season. At this point in the season, there is no reason to hold back and the Owls are certainly not looking to do so.

The idea of the nation

Not-barking up the Wrong Tree