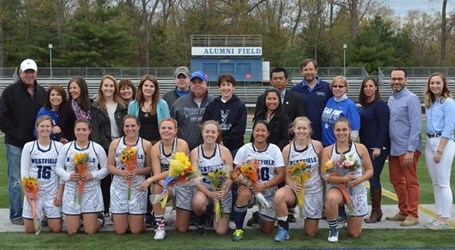 On Saturday, April 30, the Westfield State women’s lacrosse team faced off against the Framingham State Rams, ultimately soaring over the opponent in a 17-4 victory. The Owls’ relentlessness proved not only their well-rounded skills as a squad, but also why they deserve to be the top-seed in the upcoming MASCAC playoff tournament.

Just a mere 10 seconds into the game, freshman Sydney Lambert scored the Owls’ first goal, bringing the score to 1-0 Westfield. The Owls’ instant domination was merely a preview of the onslaught that was about to ensue.

The Owls only needed about another two minutes before freshman Marissa Nimeskern found the back of the net, bringing the score to 3-0 less than five minutes into the first half.

Less than 15 seconds later, senior defender Jordan Daniels scored her first collegiate goal after she barreled ruthlessly down the field, breezing past the Rams’ entire offensive and defensive forces after drawing control of the ball. The goal would bring the Owls’ lead to 4-0.

Khampaeng ultimately snagged the ball and cleared it.

Before the half was over, the Owls put away three goals: one by sophomore Samantha Coyle and two in a row by sophomore Hunter Zackaricz, bringing the Owls to a 10-0 lead at the end of the first half.

Soon after the second half commenced, Side-arm Sam Lungarini put away the Owls’ eleventh and twelfth goals, earning the senior a hat trick. Roni Orcutt assisted both of Lungarini’s goals. The Owls would lead 12-0.

With 25:05 remaining in the second, the Rams scored their first of the match, bringing the score to 12-1 Owls.

After a few scuffles and turnovers by both the Owls and the Rams, senior Taylor Eaton ultimately gained possession and fired one into the back of Framingham’s net, bringing the score to 14-1

In about five minutes, the Rams were able to grab three goals, but they still lagged behind Westfield 15-4.

Before the game was out, Westfield’s Alexa Tonelli and Lucy Barrett each attained another goal, locking the score at 17-4.

With one minute remaining, coach Jeff Pechulis began calling off the eight seniors one-by-one, subbing in an underclassman player for each.

As the seniors ran headlong toward the bench for the final time in the regular senior season, they were greeted with loud cheers from spectators, high-fives from their other teammates and Pechulis, and a tight hug from assistant coach Monica Rose.

The Owls would conclude the game with a 17-4 victory.

While their regular season may be over, the Owls will play at Alumni field on Thursday, May 5 against Worcester State, the number four seed who they beat 10-5 in the regular season.

If the Owls can snag another win against Worcester State, they will advance to the MASCAC championship on Saturday, May 7.

With 17:52 remaining, Lucy Barrett scored her first goal of the match, bringing the Owls lead to 6-0.

Afterward, the Owls had their first dry-spell of the match—well, if you can even call it that; they only went without scoring for a mere five minutes.

With 11:58 remaining, sophomore Stephanie Godek ended the brief drought as she found the back of the net after an assist from Sam Lungarini.

Less than a minute later, senior goalkeeper Mimi Khampaeng denies the second attempt—well, the only play that came close—as she intercepted a pass from Framingham’s Jessica Graham. From behind the net, Graham attempted to reach a teammate in front before