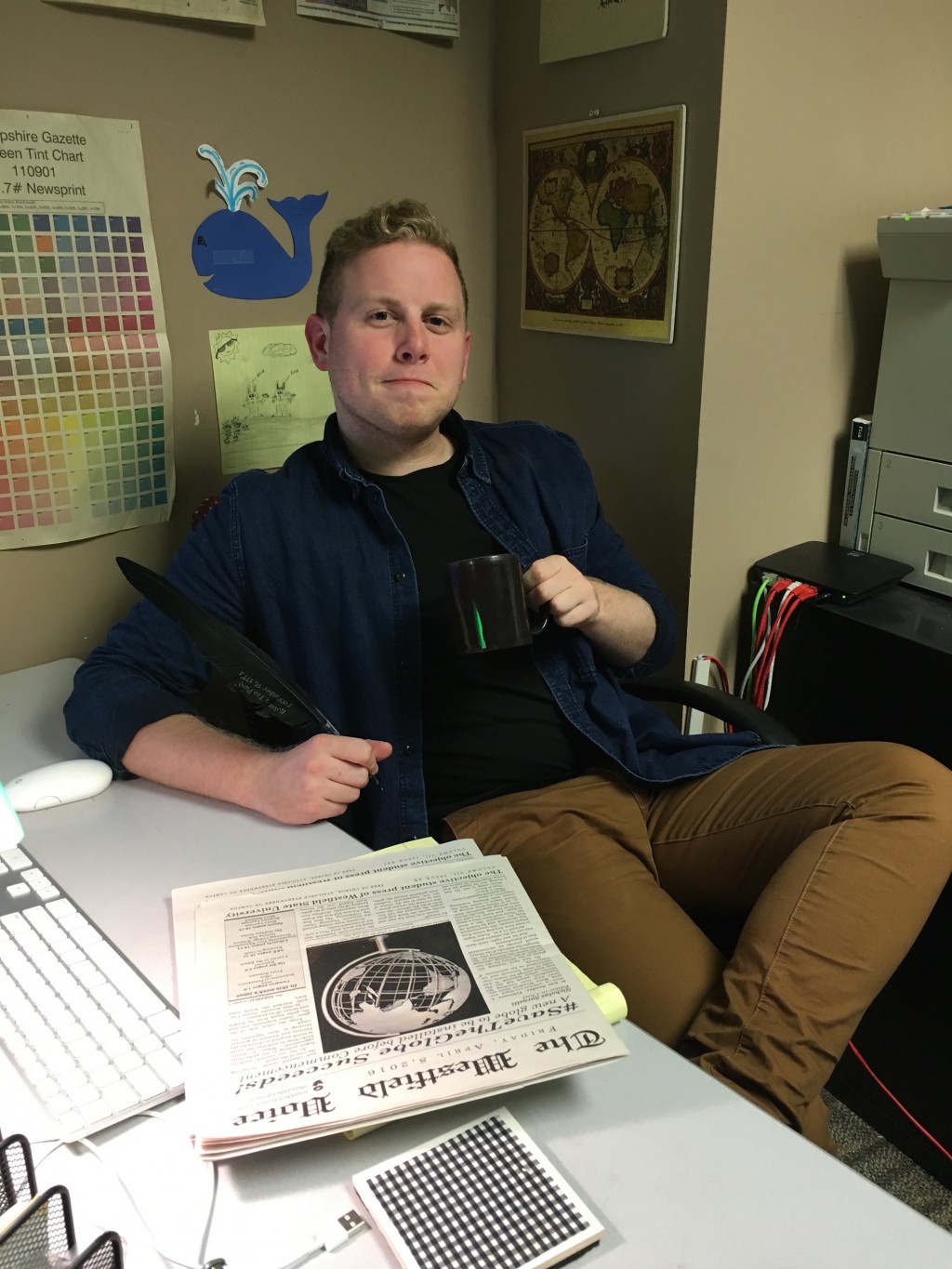 Well, friends, this is it.

This is the last week I will linger in Ely 305 until sunrise.

The last time I will crawl into my Thursday morning class, utterly exhausted.

This is my last opportunity to self-publish my feeble thoughts and emotional tangents in the very publication that prompted me to grow as a writer.

This is my last “eddy”—at least, for The Voice.

At the beginning of this academic year, I had never been more nervous about my future. Up until last spring while I was abroad in Galway, Ireland, I was enrolled as an English major in the secondary education certification program. Both before and during my time across the Atlantic, I had severe doubts about becoming a high school English teacher. I knew I could do it if I had to, but my heart wasn’t on-board.

Ever since I discovered how ardently I love to read, I fantasized about becoming a published author. How incredible it would be, I thought, to be a talented writer—to have people who actually want to read my work. I mean, I’d done some independent creative writing outside of my classes, but never anything I was confident enough to share.

Once in Ireland, I began keeping a journal simply to express my emotions. Then I decided: why not start a travel blog? It was brilliant; I could express the inner workings of my psyche while living 3,000 miles away from my family in a foreign country and be able to refer the innumerable people who would ask me “So, how was Ireland?” to my blog “American Idiot” once I returned home. Efficiency, am I right?

Immediately, “American Idiot” received praise from many of my Facebook friends and acquaintances with whom I—or my mother—shared my posts. It gave me a small vote of confidence.

It was only a spark, but it’s what would ultimately ignite my desire to keep writing and writing until my literary torch became my literary inferno. That sounds incredibly dramatic, but if you’ve ever scampered desperately through two arduous semesters with full schedules of rigorously passionate writing courses, then you’ll understand where I’m coming from.

I will never forget the moment during my first one-on-one conference with Professor Layng when he looked at me and asked, “Have you ever considered writing fiction as a career?”

Had I considered it? In fantasies and my dizziest daydreams, yes.

Hearing those words from a professor I respect so thoroughly—and someone who has been successful in the industry—sent my already-scattered mind spiraling upward into the realm of possibility.

Me, a fiction writer? It would be a dream come true.

Fortunately for me, I was able to take three other courses with Professor Layng, and he continued to fuel my encouragement, both as my academic advisor and an advisor for The Voice.

I will never be able to thank Professor Layng enough for bombarding me with the projects that have helped me grow and for believing in me when I didn’t believe in myself.

I would additionally like to thank Editor Emeritus Joshua Clark for encouraging me—well, more like coercing me—to join The Westfield Voice staff in the first place.

Josh had just become Editor-in-Chief when he began badgering me each time we happened to work together at the World Class Chicopee Big Y.

I told Josh that I had no interest in writing. That was me then. Anyone who knows me now is well aware that I—a soon-to-graduate English major with a writing concentration—am very much interested in writing for the rest of my life.

I had just completed my freshman year at the time, and I was on-track to become a secondary English teacher. Journalism and freeform fiction writing were out of the question. Well—the problem was they had never really been in the question in the first place.

But then I joined The Voice and immediately became Head Copy Editor. I had no idea how thoroughly I’d enjoy writing and editing and staring endlessly at a computer screen while trying to decide on the perfect sentence structure after I transfigured it over-and-over-and-over.

I had no idea just how much joining this publication would change my life.

To my fellow editors, it has been an absolute honor and an absolute blast to work and live and learn and grow beside each and every one of you. For as long as I live, I will never forget the innumerable hours I spent locked away in this quaint, toasty office with you all.

I will never forget Wing Wednesdays and the times I was berated for heating up my very-fragrant Brussels sprouts in the microwave for you all to endure.

Matt Carlin, I will never forget the pitch of your voice as you shrieked about nonsense—but nonsense that made me laugh until my stomach hurt.

Mike Barry, I will never forget chuckling to absolute nonsense with you and how your chilled personality helped lower my stress level when the semester became mind-bogglingly busy.

Sandra Mercer and Gina Muller, I will never forget the time we stumbled out of Ely in the wee hours and looked to the sky with our weary eyes and questioned whether or not we spelt Nathan Godard’s name wrong for the fifteenth week in a row.

Sandra, I will forever keep the dozens of sticky notes with meaningful messages and words of encouragement. You were vital in keeping my spirit and motivation up in this messy, busy semester. Friendship aside, your skills as a writer and an editor in coalition with your dedication to The Voice make you my natural nomination to become Editor-in-Chief alongside Gina. You deserve it.

Those of you who have stood by me as I chose to step up to Editor-in-Chief this semester and those who I’ve worked alongside for countless days in Ely 305, you will eternally hold a special place in my heart.

I am so thankful to have known you. I am so grateful for your hard work. I am so lucky to know that I will always have a friend in each of you, even as I am catapulted into the infamous Life After Westfield.

Thank you for making my college experience as perfect as it was.

Thank you for everything.