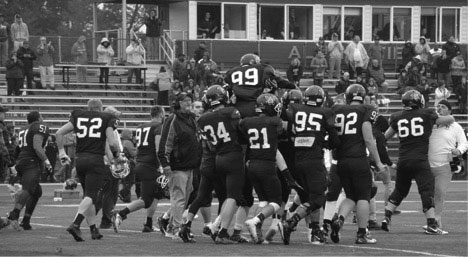 On a gloomy Saturday with consistent drizzling, Westfield (1-2) took the field against Plymouth State (4-0) to top off the homecoming weekend festivities.

Westfield wasn’t the favorite heading into this game, but their defense would keep them alive, holding Plymouth to nine first downs and forcing three fumbles throughout the game.

After a scoreless first quarter, which included an interception and a fumble by Westfield, things heated up in the second quarter. On fourth and 17 punting from their own 28, Owls punter John Ollari lined up to boot it into Plymouth territory, but was blocked by Plymouth state defenders. The ball was picked up by Plymouth’s Prince Gbaley in the end zone for the first score of the day. Plymouth connected on the extra point to open the lead to 7-0.

The third quarter of this game saw every drive end in a punt. Heading into the fourth quarter only down a score, with backup Quarterback Phil Cohen at the helm, the Owls would muster up some mojo to get a score and tie things up.

On third and three from midfield, Cohen scrambled in the backfield, was hit, and fumbled five yards from the line of scrimmage. In an effort to rally his team, Cohen managed to find the ball, pick it up, and find a lane to run for 11 yards, giving Westfield a pivotal first down.

On second down, Cohen found leading receiver Evan Garvey for a 52 yard score to tie the game at 7 after a successful extra-point kick by freshman kicker, Norman Carroll. With one minute to go from the nine yard line, Carroll set up for a possible game clinching field goal.

The 26 yard field goal missed wide right, leading to a final possession for Plymouth before the game would head to overtime

To start the overtime period, Plymouth State began the drive at their own 25 yard line. A 61 yard pass play put the Panthers on Westfield’s 14 yard line, setting them up in scoring position. An eight yard completion and a pass interference call on the following play put Plymouth on Westfield’s two yard line.

After a loss of a yard, Plymouth cracked into the end zone with a run up the middle. The score now 13-7, Plymouth couldn’t connect on the extra point and the score would remain 13-7, giving Westfield the ball.

From Plymouth’s 25 yard line, the Owls moved the ball quickly to the 15 yard line with help from a catch by Travon Holder. On the same play, a roughing the passer penalty was called, moving them to the seven. Holder rushed to the one yard line, leading to a Cohen plunge up the middle for a game tying score. To put the game away, Norman Carroll set up and nailed the extra point through the uprights for the win.

Westfield is now 2-2 overall and 1-1 in conference play. Their next game is a conference game at Framingham State this Saturday at 12pm.