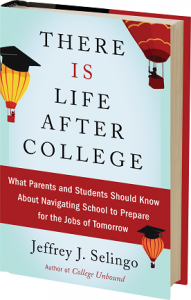 “Essential reading for high school and college students and their parents. Selingo doesn’t just provide the answers, he makes sure his readers know the important questions to ask. Students looking for a roadmap to the future should get this book and heed its advice.”
– Patricia Rose, Director of Career Services, University of Pennsylvania

“A necessary and thoughtful contribution to the conversation on the role our colleges and universities play in preparing students for young adulthood. Everyone who has an interest in the development of today’s college students and tomorrow’s leaders should read it.”
– Dan Porterfield, President of Franklin & Marshall College

Compared to their counterparts of a decade ago, more new college graduates are struggling to find the on-ramp to adulthood.

A new study of 20-somethings shows that two-thirds of new college graduates fail to find meaningful employment in the years after they leave school. They either drift from job to job, live with their parents or work part-time gigs that don’t require a college degree.

This extensive national survey finds landing a solid job right after college depends more on what students did during those years—whether they chose a major early on, took on little or no debt, or worked as interns—than where they went to school.

These results are based on the findings of an exclusive survey of 752 young adults, a nationally representative study of people between the ages of 24 and 27, and is featured in the forthcoming book, There Is Life After College.

Today’s college graduates are taking longer to reach key markers of adulthood—marriage, buying a house, and having children, the U.S. Census Bureau has reported. In the 1980s, young adults reached financial independence at the age of 26; today they don’t hit that mark until their 30th birthday.

This transition from adolescence into adulthood is made in one of three ways by new college graduates these days, according to the survey: they are either Sprinters, Wanderers, or Stragglers.

Sprinters move right into full-time work related to their major or go directly to graduate school with specific plans. Determination and experience are markers of Sprinters. 80% of them had an internship in college; 64% were sure of their major going to college.

Wanderers take about half of their twenties to get their start in a career. Students who drift through college are likely to become Wanderers afterwards. Only 50% of them had internships in college and were sure of their major going off to school. 66% of Wanderers are women.

For Stragglers, most of their twenties are spent trying to get their start in a career. Delay and indecisiveness best describe Stragglers. They often take off time from college or go part-time. 75% of them didn’t hold any internships while in school.

The Sprinters
Sprinters are twentysomethings who either jump right into their career after college or who are on a path to a successful launch after completing additional education. While we imagine this is how most college graduates should start out, only 35 percent of young adults are considered Sprinters.

In general, Sprinters have less than $10,000 in student loan debt (average debt of today’s graduates is $30,000), majored in the so-called STEM fields (science, technology, engineering, and math), and found a job within six months of graduation, nearly all of them in their field of study.

What really sets the Sprinters apart from other college graduates, however, is that 8 in 10 of them had at least one internship while in college, and 2 out of 3 of them were sure of their major when they started school.

The Wanderers
Young adults who are less sure of their major as they go off to college or change it often while there, are more likely to be among the Wanderers, according to the survey. Wanderers are in the middle of the pack of young adults these days, drifting through their third decade of life and largely treading water in the years after college graduation. Often they return home to live with their parents for a few years, earning the moniker “the boomerang generation.”

The survey found that 32 percent of young adults are Wanderers. In general, Wanderers began working in jobs unrelated to their majors or didn’t find work at all in the first six months after graduation. Half of them didn’t have any internships while in college.
Wanderers tend to take jobs that don’t require a degree—they are baristas, nannies and office assistants—and stay in them for years, not months after college graduation.

Massive shifts in the global economy are having an outsized impact on people in their twenties who have little work experience. Nearly half of recent college graduates are underemployed, the Federal Reserve reports, meaning they have jobs that don’t require a bachelor’s degree. Meanwhile, the average wage of workers with a bachelor’s degree has declined 10 percent since 2000.

Women make up a much larger proportion of Wanderers (66 percent) than do men mostly because they outnumber men in college enrollment (60 percent female vs. 40 percent male). Men who would likely become Wanderers don’t go to college immediately after high-school graduation or at all and then fall into the third group, the Stragglers.

The Stragglers
Stragglers take nearly all of their twenties to get their start in a career. Overall, Stragglers make up 33 percent of today’s young adults, according to the survey. In general, Stragglers go to college part-time, many times end up not graduating with a degree, and then frequently change jobs once they are in a career.

Once again, the role of internships looms large in how twentysomethings launch into a career. Seventy-five percent of Stragglers did not pursue any internships in college, and only about one-third of them were sure of their major when they went to college.

While the Wanderers tend to be those in their twenties taking on jobs unrelated to their majors, the Stragglers often aren’t working at all. In recent years, the labor-force participation rate for young people has declined to its lowest point in about 40 years, according to Georgetown University’s Center on Education and the Workforce.

The survey makes clear that if today’s young adults want to stand out in a competitive job market they need to learn to manage multiple pathways available to them through their late teens and early twenties to find the right kinds of educational opportunities, at the right time, to achieve the life they desire.

About the Survey
The survey for There is Life After College was conducted by Maguire Associates, a higher education consulting firm near Boston that frequently polls students on what they think about colleges. The survey group included only young adults who had at least some college experience and were born between 1988 and 1991, giving them some time to start a career in their mid-twenties. A nationally representative research panel recruited and managed by Qualtrics, an online research firm based in Utah, took the 10-minute, 23-question online survey. It was completed by 752 people.

About the Book
Based on the findings of this survey, There is Life After College explores why gaining admission to college, even a top-ranked school, is no longer enough for a teenager to successfully launch into their twenties. Nowadays, what students do in college is much more important than where they go to college. Simply emerging on the other end of the undergraduate years with a bachelor’s degree is not the ticket it once was to a good job and a solid career footing. Incorporating data from this survey with the narratives of a handful of twentysomethings, Jeff Selingo creates a new portrait of what navigating the transition into adulthood looks like. A prominent part of this image is a student’s fundamental experiences, both in and out of school, and how they shape an individual’s standing in the job market of today, allowing some to flourish where others fail.

About the Author
Jeffrey J. Selingo has written about higher education for two decades. He is a regular contributor to the Washington Post and is the author of two previous books, College (Un)bound and MOOC U. He is the former editor of The Chronicle of Higher Education. His writing has been featured in the New York Times, Wall Street Journal, and Slate, and he has appeared on ABC, CNN, PBS, and NPR. He is a special adviser and professor of practice at Arizona State University and a visiting scholar at the Center for 21st Century Universities at the Georgia Institute of Technology.